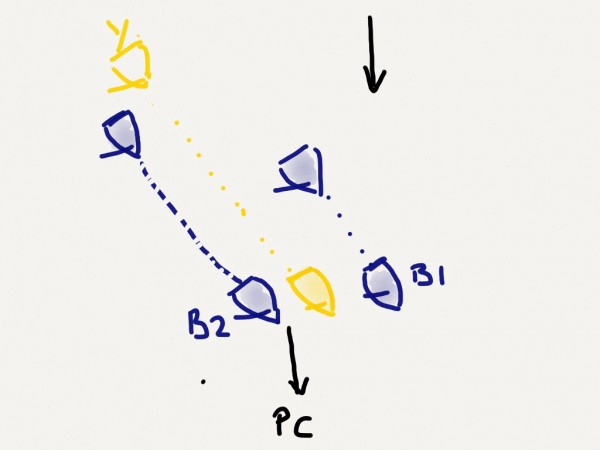 This happened in Las Palmas

Initially Yellow is astern of both Blue 2 and Blue 1but sailing faster. All three boats are sailing high.
When Yellow becomes overlapped to windward of Blue 2, Blue 2 is entitled to “luff” her…. But does not.

Some time later, Yellow becomes bows out on Blue 2 and overlapped to leeward of Blue 1.

Blue 2 starts to sail above his proper course. Yellow responds but only just enough to keep clear of Blue 2.

Yellow breaks rule 17, but Yellow is exonerated as he was forced to break rule 17 by Blue 2. Penalise Blue 2.

Although Yellow could have avoided breaking rule 17 by passing astern of Blue 1 the rules do not require her to do this.

Golden rule for Yellow, only sail just high enough to keep clear of Blue 2 if you sail higher then you have not been forced to break rule 17 and may be penalised.